Cannabis as the New Commodity 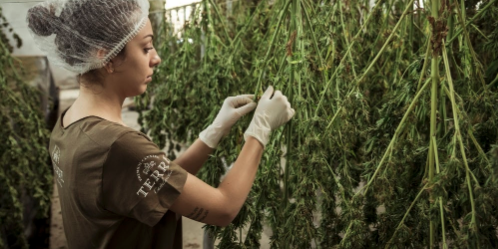 Cannabis as the New Commodity

It’s relatively simple to identify traditional commodities such as gold, crude oil, coffee, and even orange juice, but cannabis is positioned to take up residence on the list as well. After winning legal approval for both medicinal and recreational use in multiple jurisdictions across the world, cannabis stocks have seen explosive growth in recent years as a direct result. Many corporate founders and investors can attest to this growth through significant wealth increases. However, the potential for profit is fixed to spread into the future market of agriculture where cannabis could be sold alongside corn, wheat, and livestock.

By definition, commodities are goods that can be supplied in standardized and interchangeable ways. The market typically treats units of a commodity as equivalent to each other, regardless of who produced them or where they came from.

Fungibility highlights that price is typically what matters most in terms of commodities. In theory, if every product is the same, as they are in the eyes of the market, consumers would want to buy from wherever they can get the best price.

Fungibility is also the reason why commodity prices are determined by the larger, often global, market for a given product. Although this isn’t the case yet for cannabis due to differences in state and federal laws, this is very much the direction the industry is heading as legalization efforts progress.

Cannabis Trade on a Larger Scale

In a world where cannabis was traded globally without any legal restrictions, producers would have more options as to how and where they decide to trade their product. For example, if the price per pound of cannabis was higher in Canada than it was in the state of Washington, a cultivator in Washington would want to sell their product in Canada to take advantage of the higher price.

This proves to be a classic example of supply and demand. If the majority of producers moved their business to Canada, the supply imbalance would eventually equilibrate the price to the point where it would be nearly equal on both sides of the border.

This is all merely speculation as U.S. Federal law currently prevents the movement of cannabis across state lines and national borders despite cannabis’ legal status in various states and in Canada. These restrictions lead to each state effectively having its own segmented market, with seperate market prices and participants for cannabis. While this is the current dynamic of the cannabis industry, many predict its change in upcoming years.

Because the market has indicated that price is what matters most in terms of the success for commodities, many producers want to differentiate their product so that it isn’t as much of a standardized commodity. This gives them the power to command higher prices for higher quality products. The success of this mindset has been seen being implemented for a variety of other commodity products. A system of premiums and discounts to the market price has allowed both producers and consumers to account for a better or worse quality product.

Another way that cannabis companies can overcome restrictive market values is through their branding efforts. Branding is a major way of differentiating commodity-based products and is practiced successfully in a variety of industries.

Using coffee beans as an example, although they are a commodity, they can be ground and brewed into a cup of Starbucks coffee. This transforms those same coffee beans into a differentiated, identifiable product that commands a higher price. In the cannabis industry, we can find a similar opportunity in the edibles market. While perhaps the cannabis that is used to make edibles has very little differentiation, the branding and recipe differentiation we can see will lead to a wide range of prices for the resulting products

Decriminalizing Cannabis as a Commodity

Amidst speculation for cannabis’ commodity status, it’s important to note that the  U.S. government decriminalizing cannabis on a national level is the first challenge in placing a future for cannabis within the U.S. commodity exchange. Another obstacle lies within standardizing factors such as the quality and content of tetrahydrocannabinol, a psychoactive agent within the cannabis plant. Given the crafted nature of the cannabis industry, standardization could be difficult as many growers prefer a level of variability with different strains and standards.

Due to the sheer size of the industry, cannabis becoming the newest commodity is somewhat inevitable. Because of this, it’s more important than ever to remain informed of this ever-changing industry.

What is HLVd? The Infectious Viroid Feeding on Cannabis
October 28, 2022

Go to Top
Are you 21 or older? This website requires you to be 21 years of age or older. Please verify your age to view the content.